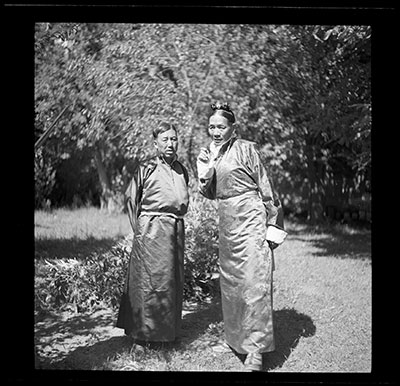 Clare Harris 2003: Two Tibetans in a garden – the man on the right is Yabshi Phünkang Kung (known as “The Duke”)
This title goes to the father or brother of the reigning Dalai Lama. As the title is hereditary there are usually a number of Kungs living at the same time, theoretically one for each Dalai Lama. The Dalai Lama’s family is often poor and so the title of Kung carries with it considerable estates. The Kung used to be the first layman of the land but the late Dalai Lama (13th) made the office of Prime minister even more exalted. Spencer Chapman writes that “The Duke, who was dressed in the same way as the Shap-pes, is a tall lean man with such bad sight that he has to hold everything up to his eyes before he can see it. He gives the impression of being completely absent-minded and unpractical in a very aristocratic and charming way” (1938: 79) Later on he became a member of the Kashag (the Tibetan cabinet).

Other Information - Biography: 'The two men are Bo Tsering, a Sikkimese doctor and Phunkhang.' [TT in conversation with KC] [KC 9/6/2006]