Procession of officials during Chipgyu Chenmo 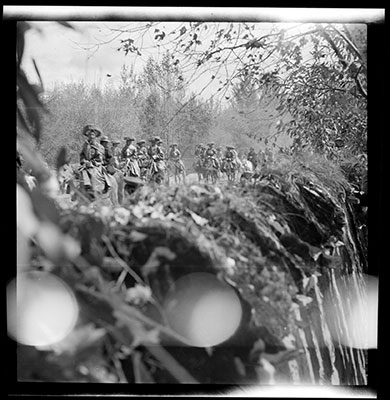 Lhasa > Between Potala and Norbu Lingka >

Procession of Tibetan government officials on horseback in ceremonial dress during Chipgyu Chenmo (chibs bsgyur chen mo) when the Dalai Lama moves from his winter residence in the Potala Palace to Norbulingka, the summer residence. There are white light spots near the bottom of the image.

Research publication - Ceremonies of the Lhasa Year , 1993, London: Serindia Publications, p. 84. "The Chipgyu Chenmo, the "Great Procession" of the Dalai Lama to the Norbu Lingka."

Other Information - Setting: Richardson discusses this event in Ceremonies of the Lhasa Year , 1993, London: Serindia Publications, pp. 83-4. "According to Protocol this ceremony, the Chipgyu Chenmo, takes place in the first week of the fourth month but in practice it may be on any day before then, chosen as auspicious for the Dalai lama to go in procession from the Potala to his summer palace in the Norbulingka. ... The short stretch of road from the foot of the Potala hill to the Norbulingka is crowded with onlookers including many monks. ..."