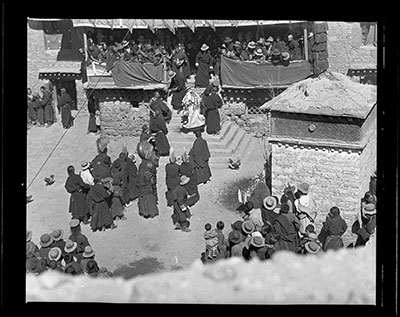 The Darpoling (dar po gling) Oracle in ceremonial dress dancing down the steps of the temple of Darpoling during the festival of Universal Peace ('dzam gling spyi bsang) which takes place on 15th Day of 5th Tibetan month. There is a group of monks at the bottom of the steps beating hand-held drums and a monk at the top of the steps holding a ritual offering. Crowds of spectators throng the balconies and verandah of the temple. In the courtyard on the right there is a square-shaped building, possibly housing a prayer-wheel, with a banner on the roof. In the foreground at the bottom of the image, is the parapet of the roof/balcony from which Richardson was taking photographs.