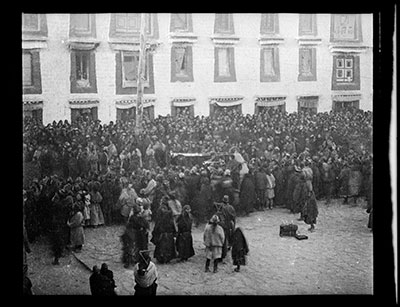 Part of the procession in which the statue of Jampa is brought from its chapel in the Jokhang around the Barkhor during the Jampa Dendren (byams pa gdan dren) festival held on the 25th day of the First Tibetan month. Crowds surround the group of monks in the centre of the image who are playing rgya gling oboes and dung chen horns. There is a prayer flag pole (possibly the Kesang Darchen) on the left of the image. The windows of a house (possibly the Yabshi Sampho) in the background are adorned with cloth covers.

Manual Catalogues - Richardson's Handlist - 'Vol. 5' Nos. 16-33. 'The Byams-pa gdan-'dren, "The Invitation to Byams pa" (Maitreya) takes place early in the morning of the 25th of the 1st month, the day after the Smon-lam Gtor-rgyag (Album I). Before dawn an ancient silver image of Byams-pa is taken out of the Jokhang and a ceremony is held in the courtyard; then the image is placed on a sort of cart and drawn around the outside of the Jo-khang (the Bar-skor) by a band of monks in a procession headed by tall banners, monks blowing trumpets and beating drums, cymbals, etc. Images of a yak and an elephant are carried round; and the Dalai Lama's real elephant also takes part in the procession. I have no photographs of this part because there was no light. The procession halts at the south east side of the Jo-khang (nos 16-21) and after a time various exercises take place near the Dalai Lama’s open air preaching throne on the south face of the Jo-khang, soldiers of the Tibetan army, wrestle and carry a great stone on their backs round a marker pole. Before long participants in a foot race and in a race of riderless horses urged on by mounted grooms begin to come into the Bar-skor. They represent the various noble families who have to enter a number of men and horses. The Dalai Lama and Government offices are also represented and usually win. At the end, prizes are given (nos 32, 33).'