Temple of Khoting at Lhakhang Dzong 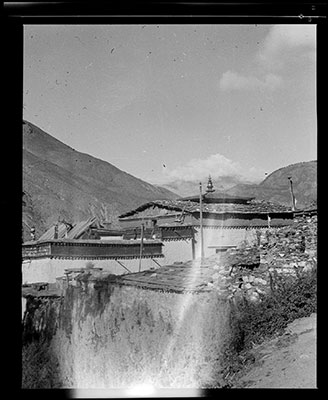 The sloping and flat roofs of the temple of Khoting at Lhakhang Dzong monastery. There are also prayer flag poles on the roofs. The sloping roof appears to be made of wooden shingle. There is a white light mark at the bottom of the image.

Other Information - Richardson wrote about his visit to the site in High Peaks, Pure Earth , 1998, London: Serindia, p. 321 "Here is the ancient but little known temple of Mkho-thing (1950) founded by Srong-brtsan Sgam-po as one of his twelve (some say 108) temples to bind down the limbs of a female demon manacing his kingdom and to give spritual protection to his borders. Half hidden by a buckthorn hedge, it is a little, self-effacing, white-walled building with a roof of wooden shingles and a small, flat, slate-covered rgya-phyibs topped by an insignificant gilded finial." [TS 6/6/2005]