Richardson at Dak Bungalow at Champitang 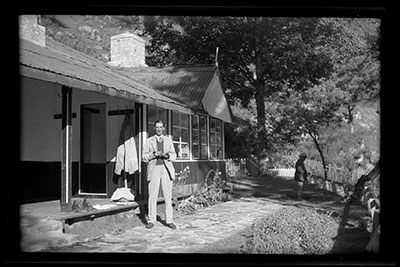 Hugh Richardson standing in front of the dak bungalow at Champithang. There is a servant in the garden on the right of the image. There is a pair of walking boots on the step beside him.

Other Information - Setting: Dak Bungalow literarily means post office. These buildings served as a post office and the trade agent's office, as well as a rest point and inn for colonial officers on tour. [TS 12/4/2005]

Other Information - Dates: This image may have been taken when Richardson was en route to Lhasa for the first time in 1936, travelling with David Macdonald and Richardson's bearer Pema Dawa as far as Yatung, where they would meet some of the other members of the Mission party. The negative format is consistent with those that Richardson used in the early stages of the British Mission. The date he was at Champithang is derived from letters home to his parents in the manuscript archive at the Bodleian Library, Oxford University. This size of negative is quite distinctive in Richardson's collection and seems only to have been used before March 1937 [MS Or Richardson 3 folio 31] [MS 7/10/2005]