An inscription pillar at Nyapso 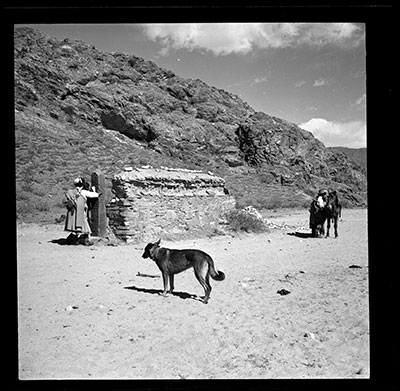 A man with his back to the camera reading the inscription on a pillar at Nyapso. The pillar is at one end of a mani wall. Another man is holding a horse's reins and there is a large dog in the centre.

Other Information - Setting: Richardson mentions this pillar in High Peaks, Pure Earth , London, Serindia Publications, 1998, p. 156, "Another group showing signs of some antiquity in occassional reversed ki-gu ... consists of two roughly dressed short pillars of stone at either end of a mani wall on the north bank of the Gtsang-po not far from the ko-sa (ferry) of Nyabso. Each pillar is inscribed on all four sides but the texts are badly damaged ... No one in the neighbourhood or at Lhasa knew anything about the pillars. They may ante-date the mani wall because one face of each pillar is virtually obscured by being placed close up against the end of the wall."