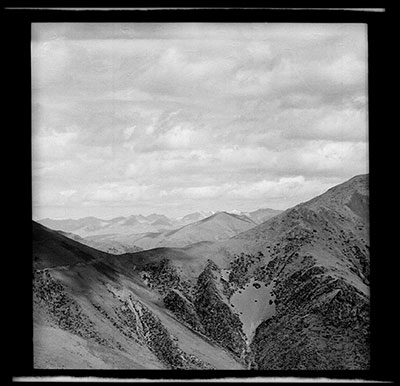 Snowcapped Chak La mountain pass in the direction of the Nyechen Thangla range.

Other Information - Dates: This image can be related to a group of 13 6x6 images which have contact prints with the batch development number '512' in red printed on them. These seem all to have been taken on, before or just after Richardson's tour to Talung in May 1939. This number relates also to the '512' batch development numbers printed in black on 21 6x9 images. The 6x6 and 6x9 images would have been produced using two different cameras demonstrating that by this time Richardson was using both a Reflex Korelle and a Zeiss Super Ikonta and that the batch numbers on contact prints may also correlate with each other across print sizes to assist in dating [MS 17/12/2005]

Other Information - Location: The Nyenchen Thangla range is situated in the Tsang region of Central Tibet. Nyenchen Thangla is the abode of the protective deity of the same name. The range is over 7000 m high and divides the upper Kyichu region and the Jangthang Plateau in the north. [TS 10/4/2005]

Other Information - Dates: This image can be related to a group of 13 images which have contact prints with the batch development number '512 taken on, before or just after the Talung tour in May 1939. This batch number relates also to the 512 Black for 21 6x9 images suggesting that by this time Richardson was using two cameras and that the batch numbers can also correlate with each other across print sizes [MS 17/12/2005]