Tented camp of the Regent 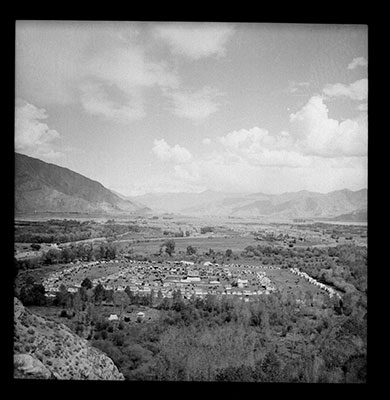 The tents of the camp of the Regent before a tour.

Manual Catalogues - Richardson' hand list: Album 2. [no.] 57. 'Tents of Regent of Tibet and noble officials, set out as a rehearsal before a formal tour. Regent's tent in centre surrounded by squares of officials tents., all arranged according to precedence'.

Other Information - The photograph shows the campment of the Regent, ( rgyal tshab ). The tent in the centre of the square is the tent of the regent and surrounding tents are for high lamas and ministers. The tents in the outer cirlce are for guards. [TS 5/4/2005]

Other Information - There is some confusion over whether this is the tented camp of the Regent or the Dalai Lama. If the date of the photograph is June 1939, the Dalai Lama would not have arrived in central Tibet as yet. However, the camp does bear some resemblance to that which was set up to receive the Dalai Lama to Lhasa in October 1939 with the Peacock Tent in the centre. [KC 18/4/2006]