Gilded roofs of the Jokhang in Lhasa 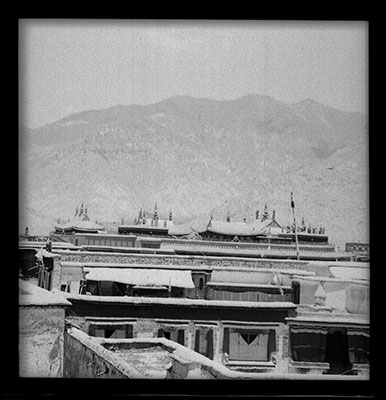 The gilded roofs of the Tsuklag khang (gtsug lag khang) or Jokhang as seen from the roof top of a house in the vicinity.

Other Information - History: The Tsuklag khang is Tibet’s most sacred religious site. It is said that every Tibetan must visit the Tsuk Lag-khang once in their lifetime. The construction of the building began in 638 AD under the patronage of Queen Bhrikuti, the Nepalese wife of Tibetan emperor Srongtsan Gampo. Richardson wrote, "Unlike the Potala,which presents a spectacle of towering majesty, the Jo-khang is so closely surrounded by a seemingly random accretion of buildings that is impossible to get an overall idea of its outward appearance". Richardson wrote a detailed history and a description of the Jokhang with drawings of the floor plans in 'The Jo-khang "Cathedral" of Lhasa', High Peaks, Pure Earth, 1998 , London: Serindia Publications. pp: 237-260. A flat roof is the general architectural feature of ordinary Tibetan houses, while gilded and a sloping roof usually is reserved for a religious building. (TS)