Phunkhang standing behind a bronze vessel on a table 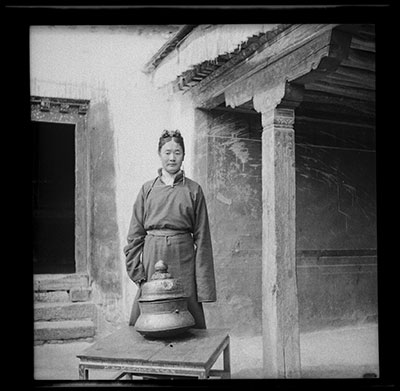 Phunkhang Jamphel Nyamnyid standing behind a low wooden table on which a bronze vessel and lid dating back to Srongtsen Gampo's time (7th century AD) is placed. He is wearing the insignia of an official (long earing in his left ear and his hair is done up in a top knot). Behind him is a doorway with a decorated wooden doorframe and on the right there is a pillar and decorated capital

Manual Catalogues - Richardson' hand list: Album 2. [no.] 54. 'A bronze kitchen vessel preserved in Phun-khang family and said to have come from kitchen of Srong-brtsan sgam-po; the cover is later'.

Other Information - Dates: The date range 1946-50 has been given for this image because the group of contact prints to which these images appear to be related can be dated to this period [MS 17/12/2005]