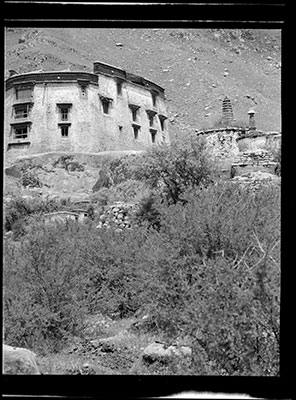 Tower building on the left with reliquary monuments behind some bushes on the right at Phabongka, a small monastery near Sera. Boulder and scrub vegetation in the foreground.

Other Information - Dates: The contact print of this image was developed with a related batch of negatives identifiable by the batch number '609', of which there are twently nine similarly marked 6x4.5 contact prints in the Richardson Collection in the Pitt Rivers Museum. Some of these prints have been dated by Richardson to October 1950, and others relate to places that he visited only in 1948-9 and it seems likely, therefore, that this image was taken within this period [MS 17/12/2005]
See image 2001.59.2.66