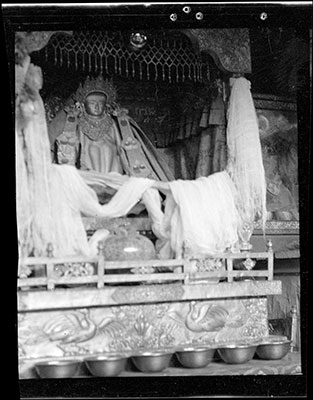 A statue of Kharsapani at Phabongka monastery near Sera. There are bowls containing offerings of water in the foreground. The statue is on a metal base decorated with birds and flowers. White scarves (katag) are hanging over a rail in front of the statue which is clothed in textile robes.

Other Information - Dates: This image can be related to a set of contact prints that were developed with a related batch of negatives identifiable by the batch number '609'. There are twenty nine similarly marked 6x4.5 contact prints in the Richardson Collection in the Pitt Rivers Museum, and some of these relate to a visit to Thekchenling during which religious shrines were photographed. Some of the prints in this general grouping have been dated by Richardson to October 1950, and others relate to places that he visited only in 1948-9 and it seems likely, therefore, that this image was taken within this period. Furthermore, Richardson's use of 6x4.5 image format seems also to suggest that the photograph was taken towards the end of his time in Tibet [MS 17/12/2005]In Negative - Notes on front of negative album in Richardson's hand in white: '2' 'Ramagang, 'Ushang, Tshurphu rgyal, Misc pillars'. On the reverse of negative album written in blue ink on white labels in Richardson's hand: 'Hu zhang, Pa blon chen, Pha bong ka, Nyenchen thang lho, Rva sgreng, Khro 'brug, etc. etc.'