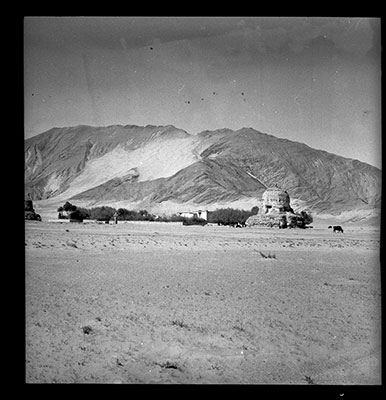 Reliquary monument (mchod rten) and doring (rdo ring) pillar at Karcung (skar cung) near Ramagang four miles from Lhasa south of the Kyichu river. There is a walled enclosure in the centre, housing a nunnery. Cattle are grazing in the foreground and there are mountains in the background.

Manual Catalogues - Richardson's Hand List. 'Album no.2. Negatives i to 5 in damaged condition but worth rescuing if possible for archeological interest. [nos.] 1,3 Site of 9th century temple at Rama-sgang near Lhasa where there is the inscribed Skar cung edict. The four old stupas, one at each corner, are a feature of early temple sitses. e.g. Samye.' [KC 21/9/2006]

Other Information - Location: Hugh Richardson mentions this site in, High Peaks, Pure Earth, 1998, London: Serindia Publications, p. 313, 'Near Ra-ma-gang on the south side of the Skyid-chu, four miles from Lhasa, is a small nunnery in quite a large enclosure in front of which is an inscribed pillar of the ninth century; and at considerable distance at each corner is a large mchod-rten, one of which had remains of glazed tiles in the appropriate colour for its geographic position. These were the remains of Khri Lde-srong-brtsan's great temple of Skar-cung (1949).' [KC 21/9/2006]

Other Information - Location: Karcung Ramagang (skar cung) is situated on south bank of the Kyichu opposite Lhasa. The old chorten in the picture was built in the 9th Century by King Senalek Jinyon (804-814). There are four similar chortens in each of the four directions. [TS 14/2/2005]