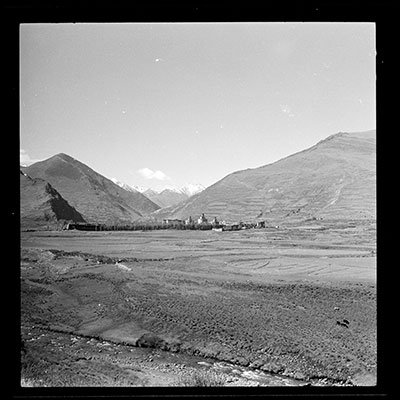 Gyama (rgya ma) as seen from a distance. There are mountains in the background, some of them snow-covered. The three reliquary monuments (mchod rten) in the centre of the enclosing wall may clearly be seen.

Manual Catalogues - Richardson's Handlist, Negative book '9' 'Drikhung, Chongye etc.' [nos] 88 - 91. 'The Rgya-ma valley is some eight miles downstream from Mal 'gro. The Khri-khang was the headquarters of one of the 13 Khri skor set up by the Mongols in the 13th century. The estate latterly belonged to the Hor-khang family. See Mkhyen brtse p 109.' [KC 5/6/2006]

Other Information - Location: Richardson mentions this site in High Peaks, Pure Earth , London, Serindia Publications, 1998, p. 306, "Further up the [Kyichu] river in a wide valley stands Rgya-ma Khri-khang " (1949), the former administrative centre of a khri ("Thousand District") under the Mongols. It is surrounded by a square enclosure of trees and a low wall. Inside there are three large mchod-rten, one of which is that of 'Gro-mgon snags-rgyaswho founded or restored the monastery of Rin-chen-sgang higher up the valley. ... Before reaching the Khri-khang, one passes on the hillside a small stone tower reputed to mark the birthplace of Srong-brtsan Sgam-po and containing a fine image of him. [KC 5/6/2006]