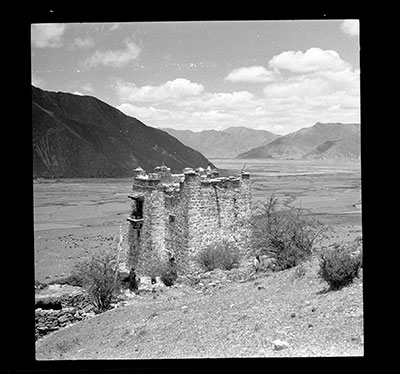 The chapel containing the figure of King Srongtsan Gampo at Gyama Trikhang (rgya ma khri khang) in the Gyama (rgya ma) valley. The building has turrets and few windows. There is a prayer flag on the left and a person standing beside it. The valley spreads out in the background.

Manual Catalogues - Richardson's Handlist, Negative book '9' 'Drikhung, Chongye etc.' [no] 87. 'Small chapel containing large image of Srong-brtsan sgam-po who was reputedly born in the Rgya-ma valley, where the chapel is. Photograph of the image is in my Tibet and its History p.86. The negative is missing or mislaid.' [KC 5/6/2006]

Other Information - Location: Richardson mentions this site in High Peaks, Pure Earth , London, Serindia Publications, 1998, p. 306, "Further up the [Kyichu] river in a wide valley stands Rgya-ma Khri-khang " (1949), the former administrative centre of a khri ("Thousand District") under the Mongols. It is surrounded by a square enclosure of trees and a low wall. Inside there are three large mchod-rten ... Before reaching the Khri-khang, one passes on the hillside a small stone tower reputed to mark the birthplace of Srong-brtsan Sgam-po and containing a fine image of him. [KC 5/6/2006]