River Tsangpo at Naygo with ruins of iron bridge 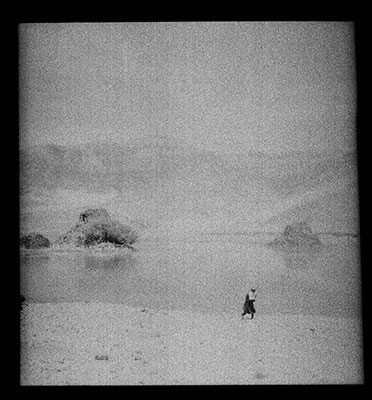 Man walking on the north bank of the Tsangpo at Naygo (gnas mgo) north of the Yarlung valley near Ngari dratshang (mnga' ris grwa tshang). It is possible to see the two banks across which an iron bridge was once strung. Overexposed.

Manual Catalogues - Richardson's Handlist, Negative book '9' 'Drikhung, Chongye etc.' [no] 77. 'There was an iron chain bridge between the two islets in the photograph. It was made by Thang-ston rgyal-po. The placeis known as Sgnas-mgo, it is on the north bank of the Gtsang-po (Brahmaputra) north of the Yarlung valley.' [KC 3/6/2006]