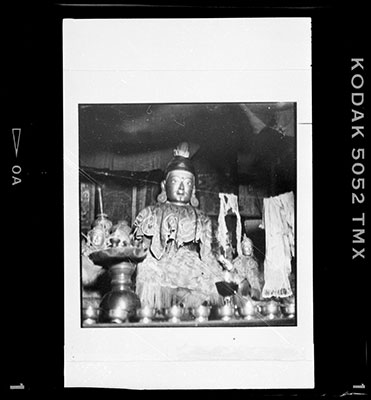 Statue of Srongtsan gampo at Gyama (rgya ma) in the East Kyichu Valley region. The statue is dressed in brocade robes and two smaller images, that of his two wives, can be seen to his side and behind him. In front of the statue there is a row of metal bowls containing water offerings and on the left there is a large stand for insense sticks. Also there is a butter lamp in front of the statue and white katag scarves hanging on a line on the right of the image. Scroll paintings can be seen in the background.

Technical Information - This image is of a print which has been re-photographed. [KC 3/6/2006] Richardson states that the negative for this image is missing in the handlist entry for no. 87. It reads, "Small chapel containing large image of Srong-brtsan sgam-po who was reputedly born in the Rgya-ma valley, where the chapel is. Photograph of the image is in my Tibet and its History p 86. The negative is missing or mislaid." [KC 5/6/2006]