Stone lion on burial mound of Ralpacan in Chyongye valley 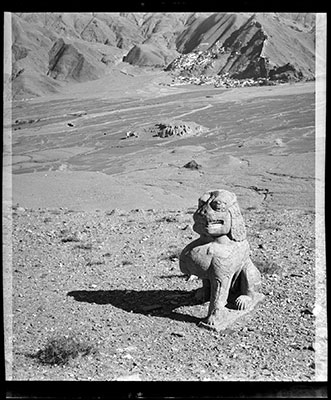 The ninth century stone lion on the burial mound of Ralpacan (ral pa can) in the Chonggye valley. The right leg is clearly damaged. There is a burial mound in the valley behind the lion and the settlement of Chonggye may be seen at the bottom of the hill in the background.

Manual Catalogues - Richardson's Handlist, Negative book '9' 'Drikhung, Chongye etc.' [no] 71. Stone lion on burial mound said to be that of Khri Gtsug-lde brtsan Ral-pa-can. This is the only known Tibetan sculpture of the 9th century.' [KC 2/6/2006]

Other Information - Setting: Richardson discusses the significance of this stone lion in High Peaks, Pure Earth , London, Serindia Publications, 1998, p. 227. " ... there has survived one small but precious relicfrom the days of the chos-rgyal . On top of the mound attributed to Ral-pa-can I found the stone figure of a lion ... . The identification of the mound depends primarily on the statement of my monk guide, but it agrees generally with the literary description of the tomb ... . At all events, the lion now stands on the mound claimed to be that of Ral-pa-can, which is furthest to the south of the whole group of tombs ... . None of the Tibetanas of Lhasa - lamas, nobles, ordinary monks and laymen - to whom I mentioned the astone lion had ever seen or even heard of it. So the figure survived, remote and forgotton, protected from the sling-shot of some thoughtless shepherd only by the awe and sanctity of the place. The damage to the right foreleg, ... may have been caused by grave-looters and it is possible that there were originally other similar figures on the mound ... . There appears no reason to doubt that the lion dates from the time when the site was used for royal burials; and by associating it with Ral-pa-can, who died in c. 842, it is placed near the end of that period. ... Sculpture in the round, of any period, is rarely seen in Tibet, but old records indicate that in early times the carving of stone figures was not uncommon." [KC 2/6/2006]