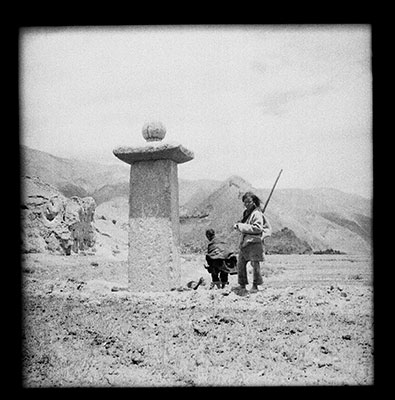 Three persons at the ninth century A.D pillar near the burial mound of Tride srongtsan (khri lde srong brtsan) in the Chyongye valley west of the Yarlung valley. The head of a man may be seen immediately to the right of the pillar at ground level. He was standing in a pit which was dug on the instructions of Richardson to inspect the lower part of the pillar which had over the centuries sunk below ground level. The man in the centre is probably the local monk who was Richardson's guide during his visit to the area of the tombs. The man on the right is possibly a passer-by and appears to have a rifle slung on his back.