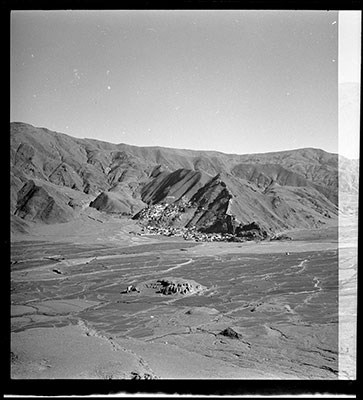 Research publication - High Peaks, Pure Earth , H. E. Richardson, London, Serindia Publications, 1998, plate 3. "From same point as Plate 2. The largest mound is attributed to Sad-na-legs. Smaller mounds are those of Mu-ne, Mu-rug and Ljang-tsha Lhas-bon. A pillar may be seen near the right side of the largest mound. 'Phyong-rgyas villae and Rdzong, site of Phying-ba Stag-rtse, and Ri-bo Bde-chen monastery in the distance."