Inscription pillar below the fort at Chyongye 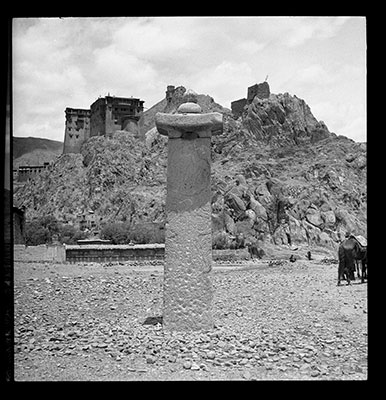 The eighth century inscription pillar below the fort at Chyongye ('phyong rgyas) near to the burial mounds of the kings in the Chyongye valley west of the Yarlung valley.

Other Information - History: Richardson discusses this pillar in A Corpus of Early Tibetan Inscriptions, H.E. Richardson, James G. Forlong Series, no. xxix, London Royal Asiatic Society, 1985, pp. 36-41 'The rdo-rings near the bridge-head at 'Phyong-rgyas". "This pillar stands in an exposed position to the south of a small bridge over the stream below the rdzong at 'Phyong-rgyas beside the track leading to the tombs of the kings ( bang-so ) about half a mile distant. The north face once bore an inscription; on the southface are carved the figures of a lion and a dragon now rather indistinct. When I visited the place in 1949 the north face ahd been so severely eroded by wind and sand that only a few letters could be read. ... The inscription probably falls within the five years between 795 and 800." (36)