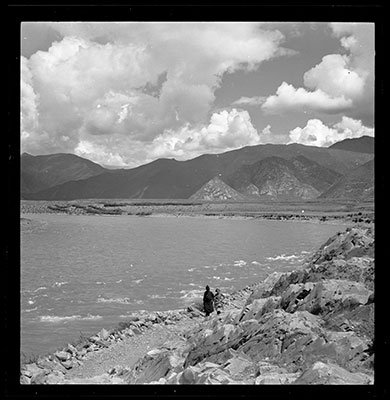 The Kyichu (skyid chu) river flowing through mountains near Drigung dzongsar ('Bri gung rdzong gsar). There are two people walking along a track on the bank of the river.

Manual Catalogues - Richardson's Handlist, Negative book '9' 'Drikhung, Chongye etc.' no 20, 'The Skyid Chu flowing down from a northerly direction, takes a sharp bend towards the east opposite Rdzong-gsar.' [KC 17/5/2006]