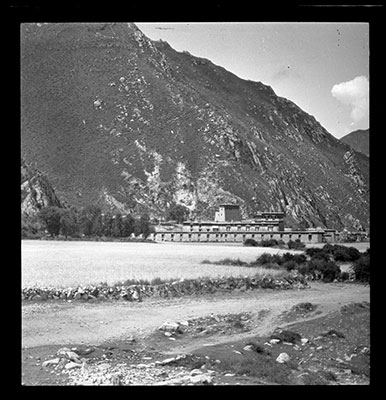 Yangri monastery (yang ri dgon) an important Trigunpa ('bri gung pa) monastery in the valley of the Shorungchu, a tributary of the Kyichu river to the east of Lhasa. The main temple (lha khang chen po) may be seen on the right of the complex and the tower used to display a ceremonial religious banner to the left of it. The single storey outer building at the front housed the monks' quarters and storerooms. There is a rocky mountain in the background and cultivated fields in the foreground.

Other Information - Richardson visted the monastery in 1948 and wrote a brief description it in High Peaks, Pure Earth , London, Serindia Publications, 1998, p. 308. The monastery dates back to 15th Century. Richardson's description of wall paintings and structure of the monastery is one of the few surviving descriptions of the place. The monastery no longer exists and the surrounding building were destroyed in 1966. [TS 25/4/2005] [KC 15/5/2006]