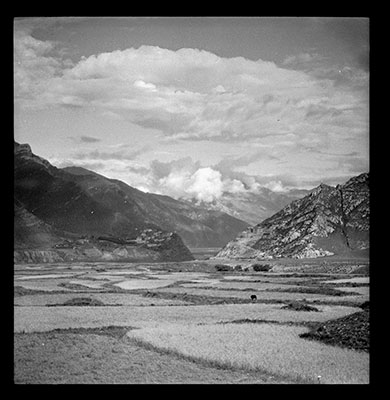 Manual Catalogues - [Hugh Richardson in conversation with Paddy Booz; see PRM Related Documents File] 'Drigung Dzongsar (also 'Bri khung Dzong sar, Drikhung Dzong gsar). This site is also referred to as Drigung ritro (hermitage, retreat), because of the nearby retreat higher up the mountain. 'Bri khung was considered the 'new' monastery, as opposed to the 'old' Kadampa site of the Yu Sna (Yu na, also spelled G.yu sna) just across the river opposite 'Bri khung (Drigung). These sites are at the Kyi Chu river gap, 60 miles east (upriver) of Lhasa. Shwai Lhakhang (Zhwai) is just before, within site of the Kyi Chu gap. Yuna on the right, Drigung Dzongsar on the right.'

Other Information - Background: Richardson mentions this site in High Peaks, Pure Earth , London, Serindia Publications, 1998, p. 307, "Opposite the valley of the Mna-ra-chu, on a rocky spur at the point where the Skyid-chu in its course from the north turns sharply west, is 'Bri-gung Rdzong-gsar (1948), a sixteenth-century monastery looking like a fortress. It was the administrative headquarters of a district owned by the 'Bri-gung=pa sect of the Bka'-brgyud-pa school. There was a large chapel inside with the usual images of the sect. On the hill on the other side of the Skyid-chu was G.yu-sna monastery, reached by an iron chain suspension bridge attributed to Thang-stong rgyal-po. ..." [KC 17/5/2006]