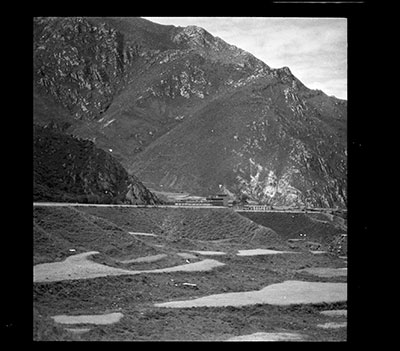 Yangri monastery (yang ri dgon) an important Trigunpa ('bri gung pa) monastery in the valley of the Shorungchu, a tributary of the Kyichu river to the east of Lhasa. The main temple (lha khang chen po) may be seen in the centre of the complex and the tower used to display a ceremonial religious banner to the right of it. There is a rocky mountain in the background and a valley dropping down from it in the foreground.

Other Information - Huge Richardson, High Peaks, Pure Earth , London. SerindiaPublications. 1998. p. 308, "Four miles up its [the Sho rong chu valley] stood the great 'Bri-gung-pa monastery of Yang-ri Dgon (1948) dating from the fifteenth century. The massive redpainted lha-khang chen-po, topped by a band of white masonry, with one of crimson brushwood above it, was entered past a line of mchod-rten, through a gateway in the west side of of a long rectangular single-storeyed white wall, pierced by the windows of monks' cells and storerooms, which surrounded the whole monastery. On its south side rose a tall, broad white tower used for the display of the gos-sku , a ceremonial religious banner. ... " [KC 15/5/2006]

Other Information - Richardson visted the monastery in 1948 and wrote a brief description it in High Peaks, Pure Earth , London, Serindia Publications, 1998, p. 308. The monastery dates back to 15th Century. Richardson's description of wall paintings and structure of the monastery is one of the few surviving descriptions of the place. The monastery no longer exists and the surrounding building were destroyed in 1966. [TS 25/4/2005] [KC 15/5/2006]