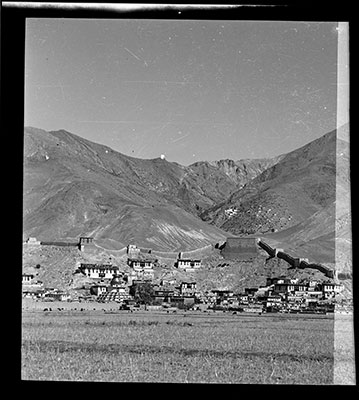 View of Gyantse monastery from the south taken from a field to the west of the town. The twenty-foot wall running along the top of the rocky spur above the monastery can clearly be seen as can the Palkhor Chode (dpal 'khor chos sde) temple and the circular Kumbum (sku 'bum) shrine towards the right of the image.

Manual Catalogues - Notes on negative album (outer case) - (on front) 'Kodak NEGATIVE FILE' in red and yellow lettering and a white label with 'Z.' in black ink'; (on reverse) 'Kangchenjunga. Gangtok Dances. RETURN of DL. Yak dancers etc. BIRDS etc.'; the letter 'A' in the top left hand corner and '8' in the right hand corner all written in white. (On spine on yellow "Subjects" label) ' GANGTOK . LHASA . PEOPLE . D.L. animals Birds; [Dates] 1936-40' written in Richardson's hand in blue ink; (below the label) the number '8' in white overwritten by the letter 'A' in pencil. Notes on negative album - (on cover) '8, Kangchenjunga. Gangtok Dances. RETURN of DL 1939. Yak dancers. Lhamo. Officials Tests. BIRDS...'. (On the spine) "KODAK NEGATIVE FILE 2 1/4 X 2 1/4 IN. (6 X 6 CM.) in embossed gold lettering; the letter "A" in white in Richardson's hand. Notes on negative index inside the negative album under 'Subject' - Notes on negative index - '?Gyantse Gonpa?' [KC 10/2/2006]

Manual Catalogues - Richardson'shandlist - '7. Western entrance gate to Zhol, below Potala (Now destroyed) name Bar-sgo Ka-ni)' (Typewritten list of contents in the album by Richardson. At the top of the page 'Book 8 - Z' is handwritten. The heading for this list is, 'Album in case, marked 'Z' on case. The list of contents in album should be ignored. Following is the proper list.') [KC 10/2/2006]