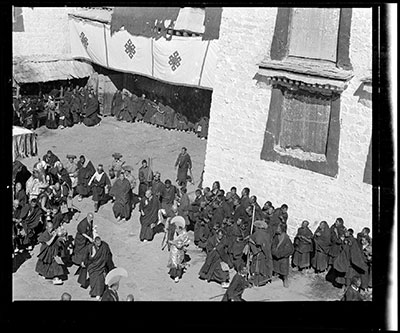 The Nechung Oracle, the State Oracle of Tibet, leaves the Jokhang to begin his procession around the Barkhor during Monlam Torgya. He is on the left beneath a ceremonial umbrella. Monk spectators line the street. The oracle is in trance and is being led by attendant monks as other monks precede him holding various ritual implements.

Other Information - Setting: The figure under the ceremonial parasol ( gdugs zhabs) is the Nechung oracle ( gnas chung sku rtan or gnas chung chos rgyal ). The oracle and his retinue is following the Torma votive offering around the Barkor, one of the oldest pilgrimage routes in Lhasa which circumambulates the Jokhang Temple. [TS 8/2/2005]