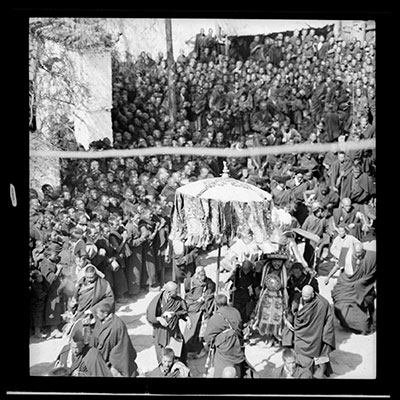 The Nechung Oracle, the State Oracle of Tibet, and his retinue leaving the courtyard outside the Jokhang to process around the Barkor. He is in trance and is wearing his ornate headdress and round metal 'mirror' (me long) on his chest. A monk supports him on each side and another is holding a ceremonial umbrella above him. Religious and lay officials can be seen in the crowd surrounding him. There is a horizontal white line about two thirds up the photograph.

Other Information - Setting: The figure under the ceremonial parasol ( gdugs zhabs) is the Nechung oracle ( gnas chung sku rtan or gnas chung chos rgyal ). The oracle and his retinue is following the Torma votive offering around the Barkor [see 'Tibet Past & Present', Bell, C. A., Oxford: Clarendon Press, 1924, p. ?]. Hugh Richardson described the sudden appearance of the Oracle in the Barkor in his book Ceremonies of the Lhasa Year : "A loud burst of oboes and cymbals and some hectic activity at the door of the Jokhang signal the appearance of the Oracle who rushes out in a state of possession grasping his sword and bow. After gyrating round the courtyard, he sets off down Barkhor supported two stalwart monks, in pursuit of the torma" [Serindia Publications, London, 1993, p. 48] [TS 9/9/2005]

Other Information - Dates: This photograph was probably taken in 1939 as Richardson used a Reflex Korelle camera to take the image and he did not acquire this until 1938. He was not present in Lhasa for the New Year ceremonies in 1938, although he was there in 1939 [MS 16/12/2005]