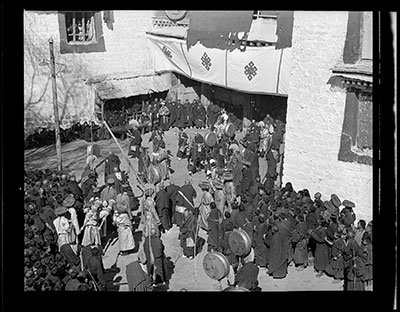 The Nechung Oracle emerging from the Jokhang during Monlam Torgya. His elaborate headdress can just be seen surrounded by a group of monks with musical instruments, dung, (long horn) rgya ling (shawm) and rnga (drum). Officials in ceremonial dress can be seen surrounding the group of monk musicians, and young monks line the courtyard of the temple. Other officials can be seen looking out of the window on the left.