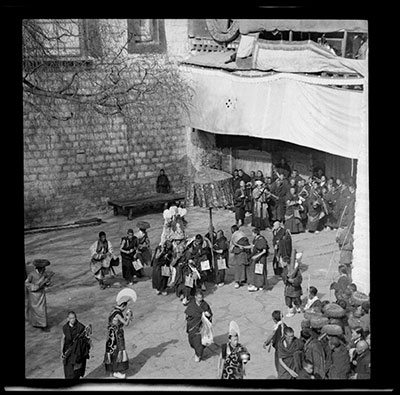 The Nechung Oracle (gnas chung ku ldan) in front of the main entrance of the Jokhang during the Lugong gyalpo (glud 'gong rgyal po) ritual on the 29th day of the second month. The Oracle can be seen beneath the ceremonial umbrella in the centre of the image wearing his heavily plumed headdress and elaborate ritual costume. Other ecclesiastical and lay officials can be seen following the Oracle from the temple, and a crowd of officials wearing broad-rimmed hats are waiting for him to proceed into the streets beyond. Branches of a defoliated willow tree can be seen entering the top left hand corner of the frame.

Manual Catalogues - Richardson's Hand List: Negative album No.1 no 64. 'The Gnas-chung oracle appears from the Jo-khang where he has a special room. He is in a trance and dances in front of the Jo-khang and the Dalai Lama's room and then rushes after the Gtor-ma. (The Gtor-ma is carried to the outskirts of the city, followd by the troops, a body of monks, and the Gnas chung oracle. It is burnt there, and the troops fire two ancient cannon of Tibetan make, with leather barrels, at a target on a hill on the other side of the river. I have no photographs of that part of the ceremony).' [Richardson identified this photograph in his handlist as being part of the Monlam Torgya ceremony. It has also been used to illustrate the Monlam Torgya in Ceremonies of the Lhasa Year (see resarch publication below). However, the white awning material above the main entrance is the same as that in other photographs taken of the Lungong gyalpo ceremony and the second window in the wall on the left identifies the photograph as being later than those of taken of the Monlam Torgya.] [KC 24/7/2006]

Research publication - Hugh E. Richardson, Ceremonies of the Lhasa Year , 1993, London: Serindia Publications, p.48. 'The Nechung Oracle comes to follow the torma.' [KC 24/7/2006] [This image is used to illustrate the taking of the torma from the Jokhang to the place where it is destroyed during the ceremony of the 'Demon-Ransom King' (glud 'gong rgyal po) which took place on the 29th day of the second month. This is confimed by the caption written on the reverse of the print of this negative (2001.59.1.54.2), 'The Torma at the Lugong ceremony'. Richardson may not have had a good photograph of the Torma taken at the time of the Monlam Torgya so used this one taken during the Lugong gyalpo, instead. [KC 24/7/2006]

Other Information - Dates: This photograph was probably taken after 1939 as the structure that previously stood over the bench where the Shengo would sit during ceremonies in the First month of the Tibetan year has been removed. Between 1940 and 1948 alterations were made to the Jokhang, an additional window was placed in the wall on the left of the image and the small roofed structure was removed. This has assisted the dating of this image [MS 17/6/2006]