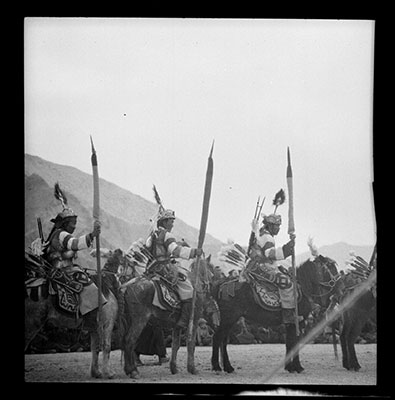 Three cavalry riders in ceremonial dress carrying rifles, lances and quivers at the Trapshi Tsisher ceremonial parade ground near Lhasa. They are wearing ancient armour. A crowd of spectators line the parade ground.

Manual Catalogues - Richardson's hand list: Negative album No.1 'New Year Ceremonies at Lhasa' [nos. 1 -16] ' The Grwa bzhi (or Phyi) bsher [typed and] 'Rtsis bsher' handwritten in Richardson's hand. "This is a review of the rta-dmag , the old feudal cavalry of whom each noble family had to provide a detachment. It takes place on the sandy plain near the army barracks at Grwa-bzhi on the 23rd of the Tibetan 1st month.
No. 5. Another photo of the standard bearers' [who wore ancient helmets and chain mail. These two sets of armour are greatly prized and are known as the Gzung srog rgyal-so yab-sras "The life rulers of the State, father and son". On the front of the helmets are inscriptions in arabic in gilded writing. Photograph of similar, but less important armour can be seen in the illustration at p.214 in my Tibet and its History .] [KC 8/7/2006]