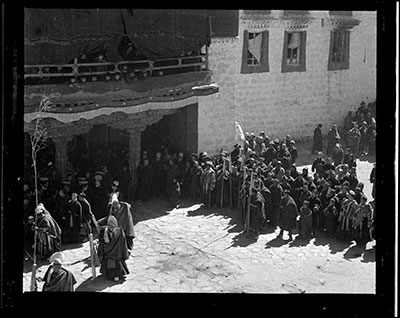 The Shengo (proctors of Drepung monastery) carrying their staff of office leaving the Jokhang through the Shira gate. A crowd of spectators look on.

Manual Catalogues - Richardson's Hand List: Negative album No.1 "Monks of the Rnam-rgyal Grwa tshang, the Dalai Lama's special monastery on the Potala Hill, and of the Sngags pa (tantric) college of Drepung conduct a prayer ceremony in preparation for the throwing out of the gtorma". [KC 23/10/2006]

Other Information - Background: See Hugh E. Richardson, Ceremonies of the Lhasa Year , 1993, London: Serindia Publications, pp 39-49 for a description of the Monlam Torgya ( mon lam gtor rgyag) ceremony. "The ceremony of Monlam Torgya is the longest and the most spectacular event of the New Year celebrations. It is the high point of the Yaso's tenure of office and the day for which the Tsisher was the preparation. [KC 21/7/2006]