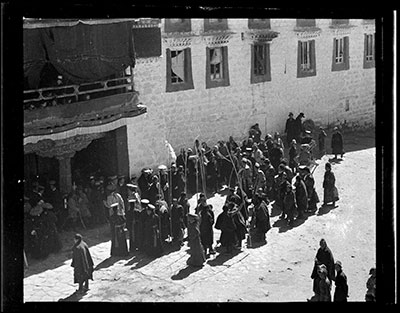 A group of government officials, monk policemen carrying long branches and spectators in front of the Shira entrance to the Jokhang during Monlam Torgyap.

Manual Catalogues - Richardson's Hand List: Negative album No.1 'New Year Ceremonies at Lhasa'. The Smon-lam gtor-rgyag Ceremony on 24th of 1st month for driving out evil. Nos. 44 - 46. "Now the City Magisterates resume office which they had surrendered to the monk Zhal ngo at the beginning of the Prayer days. This is done at a side door on the west of the Jo-Khang buildings. The Zhal-ngo's servants throw down a bundle of whips which the magistrates pick up thus resuming lay control of the city". [KC 21/7/2006]

Other Information - Background: See Hugh E. Richardson, Ceremonies of the Lhasa Year , 1993, London: Serindia Publications, pp 39-49 for a description of the Monlam Torgya ( mon lam gtor rgyag) ceremony. "The ceremony of Monlam Torgya is the longest and the most spectacular event of the New Year celebrations. It is the high point of the Yaso's tenure of office and the day for which the Tsisher was the preparation. [KC 21/7/2006]