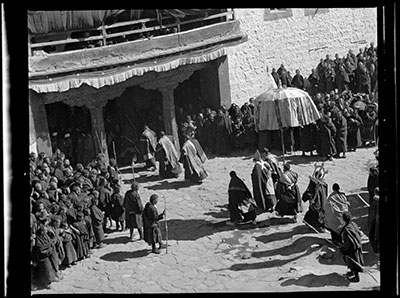 The Ganden Tri Rinpoche entering the Jokhang through the Shira gate on the occasion of the Monlam Torgyap. He is wearing a peaked yellow monastic hat with a tasselled eyeshade. He is preceded by a line of monks carrying sticks of insense. A state ceremonial umbrella is carried behind him. Behind the umbrella bearer there is a monk carrying a folding stand or chair. There are men with sticks standing on the left and a group of mainly monk onlookers on the right.

Manual Catalogues - Richardson's Hand List: Negative album No.1 'New Year Ceremonies at Lhasa'. The Smon-lam gtor-rgyag Ceremony on 24th of 1st month for driving out evil. Nos. 44 - 46. "Now the City Magisterates resume office which they had surrendered to the monk Zhal ngo at the beginning of the Prayer days. This is done at a side door on the west of the Jo-Khang buildings. The Zhal-ngo's servants throw down a bundle of whips which the magistrates pick up thus resuming lay control of the city". [KC 23/10/2006]