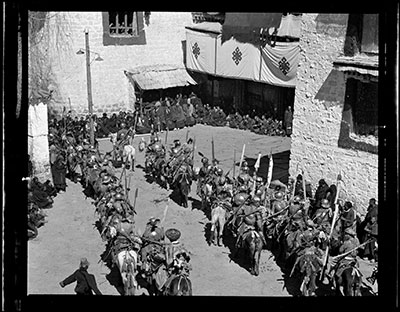 Cavalry wearing ancient armour and holding lances slowly riding past the main entrance of the Jokhang during Monlam Torgyap. The Dalai Lama's window may be seen above the awning where the four Shengo (Drepung proctors) are seated. The lampost is on the left.

Other Information - Background: See Hugh E. Richardson, Ceremonies of the Lhasa Year , 1993, London: Serindia Publications, pp 39-49 for a description of the Monlam Torgya ( mon lam gtor rgyag) ceremony. "The ceremony of Monlam Torgya is the longest and the most spectacular event of the New Year celebrations. It is the high point of the Yaso's tenure of office and the day for which the Tsisher was the preparation. It brings together religious and secular elements and marks the formal end of the Monlam Chenmo. ... (p. 39) 'When the road is clear [after the Zimchongpa depart] it is the turn of the cavalry ... . [After prostrating to the Dalai Lama] they walk back, mount their horses and lead the cavalry slowly past the Jokhang and on round the Barkhor to the south-east corner again.' (p. 44) [KC 19/7/2006]