Dobdob monk policemen outside the Jokhang 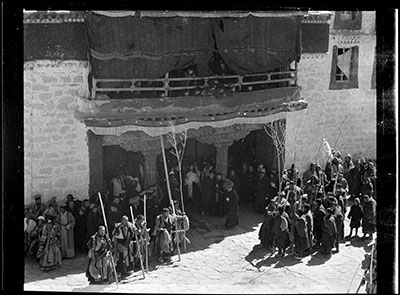 Monk policemen, dobdob (ldob ldob) outside the entrance to the Shira gate on the south side of the Jokhang during Monlam Torgyap. They are wearing padded clothing and holding long wooden staves and branches used to control the crowds during the Great Prayer Festival (Monlam Chenmo). There is a group of lay officials in the background in the entrance to the Jokhang.