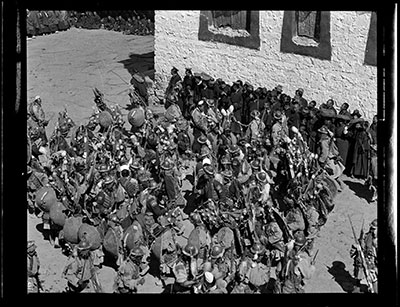 Zimchongpa infantry performing the 'coiling snake' at the end of their display of prowess at the Monlam Torgyap outside the main entrance to the Jokhang.

Other Information - Background: See Hugh E. Richardson, Ceremonies of the Lhasa Year , 1993, London: Serindia Publications, pp 39-49 for a description of the Monlam Torgya ( mon lam gtor rgyag) ceremony. "The ceremony of Monlam Torgya is the longest and the most spectacular event of the New Year celebrations. It is the high point of the Yaso's tenure of office and the day for which the Tsisher was the preparation. It brings together religious and secular elements and marks the formal end of the Monlam Chenmo. ... (p. 39) Then the Zimchongpa march nosily up to the forecourt of the Jokhang. Some line the Barkhor while others form up in two files in the centre of the road. They take it in turn to display their martial prowess, singing war songs about Penden Lhamo as they do so. The bowmen brandish their bows and the swordsmen make a great show of fencing. Then those with firearms taunt the opposing rank, challenging them with abusive language much enjoyed by the onlookers. ... (p. 41) ... Finally they trot off, one file in a zig-zag movement, the other running round in a circle until they form a compact mass, known as the coiling snake." (p.44) [KC 23/10/2006]