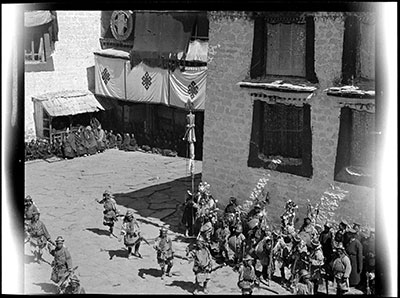 Two rows of Zimchongpa infantry dressed in ancient armour performing outside the main entrance to the Jokhang at the Monlam Torgya ceremony. The Shengo (proctors of Drepung monastery) are seated on a bench under an awning on the left of the photograph.

Other Information - Dates: In a letter to his parents dated November 6th 1936, Hugh Richardson commented that he was investigating buying a new Zeiss Super Ikonta camera [Hugh Richardson Manuscript Archive, Bodleian Library, MS. Or. Richardson 3 folio 46]. On March 29th 1937 he comments in a further letter to his parents that it would probably be better to use the larger image frame [MS Or Richardson 3 folio 82]. This has assisted the dating of this image to 1937 [MS 6/10/2005]