Yaso commanders at the Monlam Torgyap 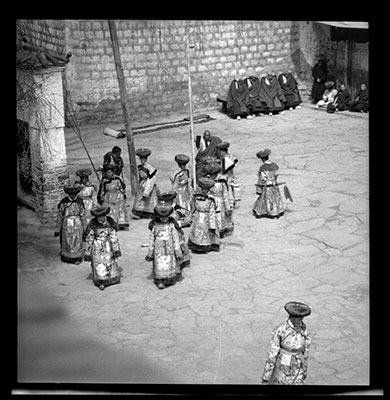 Yaso commanders returning to their horses after having prostrated to the Dalai Lama's window outside the main entrance to the Jokhang during Monlam Torgyap. The Shengo (proctors of Drepung monastery) are seated on a bench in the top left hand corner of the photograph.

Other Information - Background: See Hugh E. Richardson, Ceremonies of the Lhasa Year , 1993, London: Serindia Publications, pp 39-49 for a description of the Monlam Torgya ( mon lam gtor rgyag) ceremony. "The ceremony of Monlam Torgya is the longest and the most spectacular event of the New Year celebrations. It is the high point of the Yaso's tenure of office and the day for which the Tsisher was the preparation. It brings together religious and secular elements and marks the formal end of the Monlam Chenmo. ... The ceremony begins with the arrival of the Shengos [proctors of Drepung] and their assistants who march from the Shingra gate, a little way south of the main entrance to the Jokhang. ... They take their seats on a bench below the Dalai Lama's window. (p. 40) ... The Yaso then lead their troops to the south-west corner of the Barkor where they dismount and walk with their attendants to the forecourt of the Jokhang where they prostrate themselves to the Dalai Lama after which they walk back, mount their horses and lead the cavalry slowly past the Jokhang and on round the Barkor to the south-east corner again". (p. 44) [KC 17/7/2006]

Other Information - Dates: This photograph was probably taken after 1939 as the structure that previously stood over the bench where the Shengo would sit during ceremonies in the First month of the Tibetan year has been removed. Between 1940 and 1948 alterations were made to the Jokhang, an additional window was placed in the wall in the background of the image and the small roofed structure was removed. This has assisted the dating of this image [MS 17/6/2006]