Officials at Monlam Torgya outside entrance of Jokhang 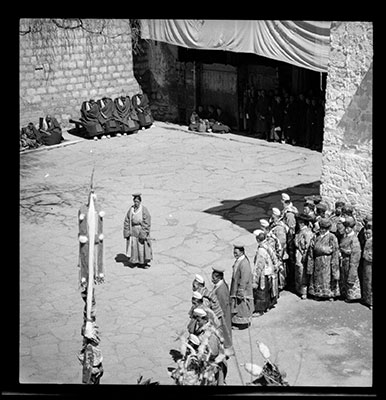 The main entrance to the Jokhang during the Monlam Torgya ceremony. The Shengo (proctors of Drepung) are sitting on a bench on the left of the photograph and lay officials are lined up on the right looking in the direction of the standard in the foreground.

Other Information - Background: See Hugh E. Richardson, Ceremonies of the Lhasa Year , 1993, London: Serindia Publications, pp 39-49 for a description of the Monlam Torgya ( mon lam gtor rgyag) ceremony. "The ceremony of Monlam Torgya is the longest and the most spectacular event of the New Year celebrations. It is the high point of the Yaso's tenure of office and the day for which the Tsisher was the preparation. It brings together religious and secular elements and marks the formal end of the Monlam Chenmo." (p.39) [KC 23/10/2006]

Other Information - Dates: This photograph was probably taken after 1939 as the structure that previously stood over the bench where the Shengo would sit during ceremonies in the First month of the Tibetan year has been removed. Between 1940 and 1948 alterations were made to the Jokhang, an additional window was placed in the wall on the left of the image and the small roofed structure was removed. This has assisted the dating of this image [MS 17/6/2006]