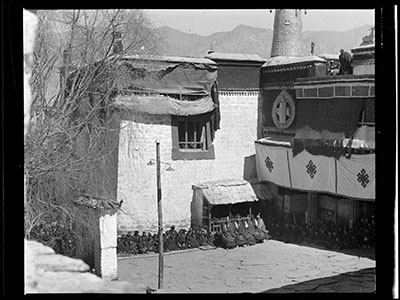 The Shengo (proctors of Drepung monastery) seated on a bench below an awning above which is the window at which the Dalai Lama sat. This is the main entrance to the Jokhang located on the west side of the Barkhor. The occasion is the Monlam Torgyap. The lamp post is clearly visible as is the tree reputedly planted by Princess Wen-chiu, the Chinese wife of King Srongtsen Gampo.

Manual Catalogues - Richardson's hand list: Negative album No.1 'New Year Ceremonies at Lhasa'. The Smon-lam gtor-rgyag Ceremony on 24th of 1st month for driving out evil. No. 21. 'The Zhal-ngo take their seat on the north side of the courtyard at the west facing entrance of the Jo-khang; above them is the window of the Dalai Lama's private room from which he watched the ceremony.' [KC 23/10/2006]

Other Information - Background: See Hugh E. Richardson, Ceremonies of the Lhasa Year , 1993, London: Serindia Publications, pp 39-49 for a description of the Monlam Torgya ( mon lam gtor rgyag) ceremony. "The ceremony of Monlam Torgya is the longest and the most spectacular event of the New Year celebrations. It is the high point of the Yaso's tenure of office and the day for which the Tsisher was the preparation. It brings together religious and secular elements and marks the formal end of the Monlam Chenmo. ... The ceremony begins with the arrival of the Shengos [proctors of Drepung] and their assistants who march from the Shingra gate, a little way south of the main entrance to the Jokhang. ... They take their seats on a bench below the Dalai Lama's window." (p.39-40) [KC 17/7/2006]

Other Information - Dates: In a letter to his parents dated November 6th 1936, Hugh Richardson commented that he was investigating buying a new Zeiss Super Ikonta camera [Hugh Richardson Manuscript Archive, Bodleian Library, MS. Or. Richardson 3 folio 46]. On March 29th 1937 he comments in a further letter to his parents that it would probably be better to use the larger image frame [MS Or Richardson 3 folio 82]. This has assisted the dating of this image to 1937 [MS 6/10/2005]