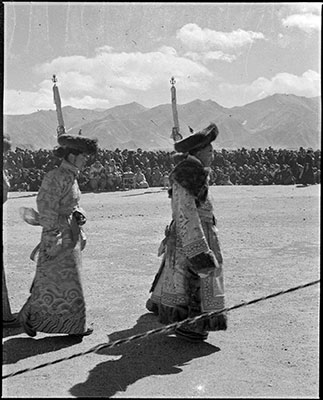 Officials known as Yaso can be seen in the foreground wearing ceremonial dress and bearing standards. The one on the right is Dingja Dorje Gyaltsen. They are walking across the grounds at Trapshi Tsisher near Lhasa, a military ground used for an annual review in the first month of the Tibetan New Year. In the background a crowd of spectators can be seen lining the perimeter of the review ground.

Manual Catalogues - Richardson's hand list: Negative album No.1 'New Year Ceremonies at Lhasa' [nos. 1 -16] ' The Grwa bzhi (or Phyi) bsher [typed and] 'Rtsis bsher' handwritten in Richardson's hand. "This is a review of the rta-dmag , the old feudal cavalry of whom each noble family had to provide a detachment. It takes place on the sandy plain near the army barracks at Grwa-bzhi on the 23rd of the Tibetan 1st month.
No. 2. The arrival of the two Ya-sor , nobles appointed annually as commanders, responsible for the parade and subsequent ceremonies. [KC 8/7/2006]

Other Information - Setting: Trapshi is a military camp just outside Lhasa. The group of people sitting on the ground are junior government officials. They are wearing hats known as Bokto ( 'bog to ) worn by the sons of aristocratic families when they are first commissioned into government office. In 'Tibet Past & Present', [Oxford:2651 Clarendon Press, 1924, p.?] Sir Charles Bell states that Trapshi Tsisher means "The Review (Inspection) at Trapshi". The annual ceremony of Trapshi Tsisher takes place on the 23rd day of the 1st Tibetan month, usually in February in the Roman calendar. The origin of the ceremony is unknown. [TS 10/1/2005]

Other Information - Background: See Hugh E. Richardson, Ceremonies of the Lhasa Year , 1993, London: Serindia Publications, pp 31-37 for a description of the preparations and the actual day of the Review at Trapshi. As for the Yaso costume, "The Yaso robes are of the most costly brocade embroidered with dragons on the front and back, and so heavy they can stand up by themselves. They wear large, round, flat hats with a fur brim and red silk crown with a vase-shaped gold and turquoise ornament and a coral button on top. The robe is girded by a wide gold belt and they wear a dagger, an embroidered purse and a silk-covered cup case. Their attendants are also in a fine brocade or silk of blue or green; ...". (p.31) ... "The expense to the Yaso of their term of office is very heavy indeed. Different dress has to be worn on different occasions and although some items may be borrowed from friends, there is an element of competition to go one better than one's predecessor." (p.33) [KC 8/7/2006]