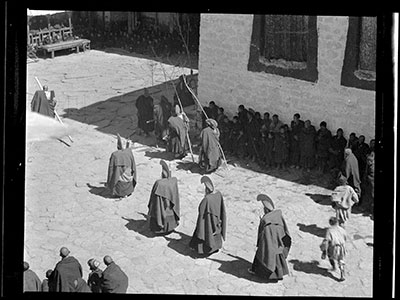 The arrival of the Shengo, the proctors of Drepung, at the Jokhang for the Monlam Torgya ceremony. They carry wooden staves decorated with ironwork. They are accompanied by monk police on their right carrying long branches and headed by a dobdob (ldob ldob) carrying a long, straight wooden pole ahead of them. The bench they will sit on for the duration of the ceremony can be seen in the top left hand corner of the image. Young monk spectators are standing up against the wall of the Jokhang.

Manual Catalogues - Richardson's hand list: Negative album No.1 'New Year Ceremonies at Lhasa'. The Smon-lam gtor-rgyag Ceremony on 24th of 1st month for driving out evil. No. 21. 'The Zhal-ngo, the Proctors of 'Bras-spungs (Drepung) arrive. They have been in control of the city of Lhasa during the first part of the month wen some 25,000 monks come to the city to pray and to receive alms.' [KC 17/7/2006]

Research publication - Hugh E. Richardson, Ceremonies of the Lhasa Year , 1993, London: Serindia Publications, p.41. "The Shengo arrive at the forecourt of the Jokhang for the Monlam Torgya." [KC 23/10/2006]

Other Information - Background: See Hugh E. Richardson, Ceremonies of the Lhasa Year , 1993, London: Serindia Publications, pp 39-49 for a description of the Monlam Torgya ( mon lam gtor rgyag) ceremony. "The ceremony of Monlam Torgya is the longest and the most spectacular event of the New Year celebrations. It is the high point of the Yaso's tenure of office and the day for which the Tsisher was the preparation. It brings together religious and secular elements and marks the formal end of the Monlam Chenmo. ... The ceremony begins with the arrival of the Shengos [proctors of Drepung] and their assistants who march from the Shingra gate, a little way south of the main entrance to the Jokhang. ... They take their seats on a bench below the Dalai Lama's window." (p.39-40) [KC 17/7/2006]