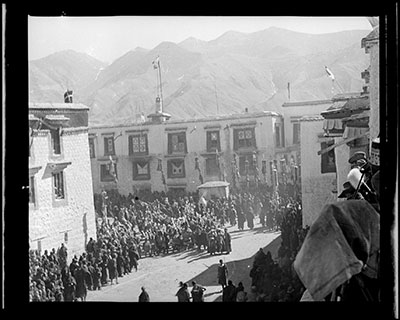 Procession on the Barkhor rounding the south west corner of the Jokhang during the Monlam Torgya ceremony. Officials are leading lines of Zingchongpa foot soldiers. There is also a group of standard bearers in the right hand corner. The photograph is taken from the Doring house and a camera on a tripod covered by a cloth can be seen on the right of the image. The house in the centre of the image is the Yabshi Sampho.