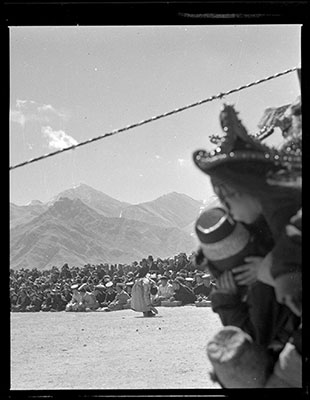 Junior officials pay their respects and report to senior officials and members of the Cabinet at the annual Review ceremony held at the Trapshi Tshisher official ceremonial parade ground just outside Lhasa. A woman with a triangular Lhasa headdress can be seen on the right side of the photograph with her back to the camera and with her hand on the back of a child in a fur and brocade hat.

Other Information - Background: See Hugh E. Richardson, Ceremonies of the Lhasa Year , 1993, London: Serindia Publications, pp 31-37 for a description of the preparations and the actual day of the Review at Trapshi. "... the Tsikhang official steps up to the tent [where the Kashag ministers are seated] and bowing almost double as he sweeps off his hat, announces in a loud voice that the number of men and horses is correct. He is followed in succession by four boys , from the Tsikhang school for aspiring officials, smartly dressed in fine broadcloth with round yellow hats and their hair in neat pigtails down their backs. They come up in turn to the Kashag's tent and bowing deeply report in a shrill voice on different items of the equipment - so many saddles, guns, lances, arrows, pairs of boots and so on." (p.37) [KC 23/10/2006]