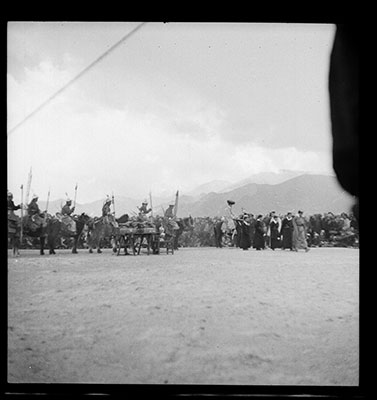 A Yaso commander on horseback at the head of cavalry riders carrying weapons and standards and a few junior officials leading them with crowd looking on at the Trapshi Tsisher. There is a tressel table in front of the riders.

Other Information - Dates: This photograph was probably taken in 1939 as Richardson used a Reflex Korelle camera to take the image and he did not acquire this until 1938. He was not present in Lhasa for the New Year ceremonies in 1938, although he was there in 1939 [MS 16/12/2005]