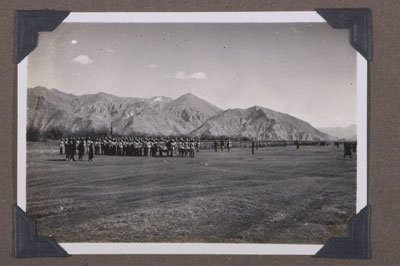 A Guard of Honour by Tibetan soldiers. Although the caption for this image states that these soldiers were the Regent's Guard of Honour, it is not clear whether they are presenting themselves on the occasion of his departure from or return to Lhasa (October 6th 1936 or November 23rd 1936 respectively, or whether they are presenting themselves at the military display attended by Brigadier Neame (September 7th 1936)