F. S. Chapman with a cine camera near Lhasa 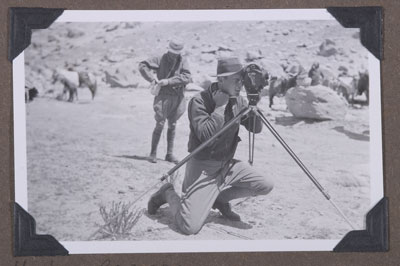 Frederick Spencer Chapman with a cine camera in the Lhasa area. Sir Basil Gould is in the middle distance with horses belonging to the Mission he was leading to Lhasa in the background

Other Information - Setting: Spencer Chapman kneeling at his tripod to take cine pictures on the outskirts of Lhasa. He was the first to use colour film in Tibet and the results were much appreciated by both British and Tibetan audiences. However, Spencer Chapman found that at first Tibetans were “… a little suspicious, especially the poorer people, and more particularly of the big cinema camera which made a formidable noise and, with its long telephoto lens, resembled some new-fangled automatic gun”. (1938:247) [CH 2003]