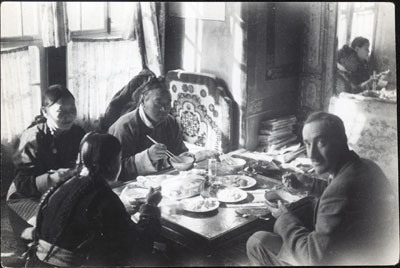 Nepean, Tsarong and two women sitting round a table in Tsarong's house, eating breakfast. They are eating from bowls with chopsticks and there is a selection of dishes on the table.

Biographical Information - Dasang Damdul Tsarong, two of his wives and Evan Nepean eating lunch in the Tsarong mansion. Lunch and dinner parties occupied much of the time of the British Missions to Lhasa. Members of the Tibetan aristocracy invited the British to dine in their homes, though the meals were often so large they were unable to finish them. Some of the delicacies provided, such as shark’s fin and sea slug, presented something of a challenge to the British palette. The demand for Basil Gould to attend these meals eventually became so great that he decreed that he would not dine with anybody below a fourth rank official. However, this rule did not apply to the rest of the Mission team and hence they often dined out during their time in Lhasa. [CH 2003]